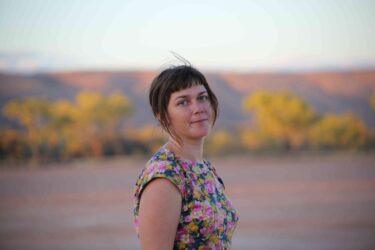 Kelly Lee Hickey is an artist, creative producer and community philosopher, living and working on Larrakia and Arrernte lands. Her practice explores the intersections between people and place through writing, performance, and collaborative and participatory works.

An Australian poetry slam champion and winner of the Press Press manuscript award, she has performed at festivals internationally, including the Sydney Writers Festival, Ubud Writers Festival, Queensland Poetry Festival and Bookworm festival, with publication credits including Australian Poetry Journal, Rabbit Journal, Solid Air and Going down Swinging. She was the artistic director of the National Writers Festival (2007) and the Eye of the Storm Festival (2013) and has worked collaboratively as an artist, researcher and producer across a range of mediums including radio, animation, quilting and cartography.

She has undertaken creative residencies nationally and internationally including at Rumata Art space (Indonesia) and Arteles (Finland). She holds a Ba of Community Development and has studied with the Emergence Network, Dulwich Centre, Zen Zen Zo and was a participant in the inaugural residential at A School Called Home (Sweden). She is a PhD candidate at Victoria University exploring the intersections between creative practice and community pedagogies in response to ecological and social crisis.